2018 is the year of the 200th birthday of Karl Marx (1819–1893). In the series of international reflections on the topical relevance of Marx's ideas we provide a special contribution to the history of his impact on architecture.

In Vienna, the names of the two well-known council housing estates Karl Marx Hof and Friedrich Engels Hof bear testimony to the influence that the political revolutionary had on built history. In the 1980s Manfredo Tafuri, founder of a neo-Marxist theory of architecture, ushered in an enduring architectural renaissance of Viennese council housing with his ground-breaking book Vienna Rossa.

Previously, Viennese social housing had been ignored by significant historians of modern architecture, such as Leonardo Benevolo, Sigfried Giedion or Henry Russell Hitchcock, because of its traditional, monumental formal vocabulary. It is not the buildings of Red Vienna but those of the New Frankfurt that have become synonymous with modern architecture.

In cooperation with the Institute of Art and Architecture at the Academy of Fine Arts Vienna, the fourth edition of Collection with a View spotlights the historical relationships between Marxist theory and Viennese social housing. 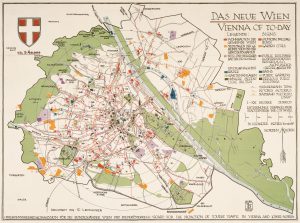 The collage in the window to the yard of the Az W was made possible thanks to the kind support of: Pez Hejduk and Lilli Bauer, Waschsalon Karl-Marx-Hof.