While his Stadthalle was still under construction, in 1956 Roland Rainer also participated in a competition for ideas for the renovation of what was at the time a desolate historic city ensemble close to St. Stephen's Cathedral (Stephansdom).

In the postwar years the ‘Blutgassenviertel’ behind Stephansdom and its tightly packed houses was not considered modern enough. Following an initial discussion of ‘core removal’, in 1959 a competition was launched for ideas for a “recovery of the structural relationships in the historic Viennese centre”. The brief called for the harmonic connection of old and new, however without prioritising the conservation of the existing substance: “So as not to restrict the freedom of the ideas submitted to the competition, compliance with conservation guidelines is not a required condition…” A total of 33 projects were submitted. The aim was not a purely commercial innercity district but a mix with public facilities, such as a nursery for small children, a library and a Volksheim, as well as to improve the traffic situation. The jury awarded 2nd prize to Roland Rainer, behind the architecture office of Theiss & Jaksch. They praised the “artistic quality” and the “welcome synthesis of the existing substance and the new” as well as the skillful inclusion of the ‘Pawlatschenhaus’ at 3 Blutgasse.

None of the projects submitted went any further. Instead, the houses were renovated in the 1960s — with a particular target group in mind: cultural personalities who were prepared to go without certain modern standards for the sake of the atmosphere. Famous actors and artists subsequently moved in, replacing of the previous tenants. Several art galleries opened premises in the ground level zone. City planner Leopold Redl called this early example of Viennese urban renewal “luxury renovation”. 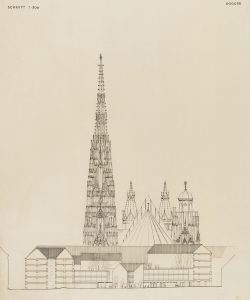